When we found out in the summer that our move to Tunis was delayed we had no idea if we would be here for Christmas or not.  I think that at some points along the way we were not even sure we would make it at all!  But we are here and it is Christmas - except not like the ones we used to know! 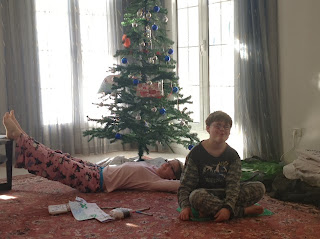 Richard grew up having the expat Christmas experience but I think that his mother was much more organized than this Mrs. Bennett.  Last night, after our Christmas Eve dinner of a sushi feast delivered to our house, we realized that we forgot to pack the sacks that Santa usually uses to put our parcels under the tree.  So we improvised.  Duffel bags with notes to Santa did the job nicely.

Stockings were hung from the staircase with care? 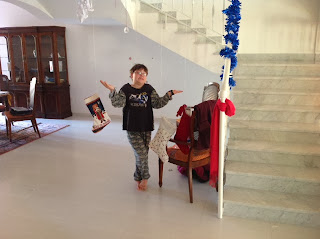 In addition, Santa had to follow the line of post it notes to get to his snack last night - which was a number (6) of mandarin oranges from the tree in the back yard -with a plea from Kaitlyn that he eat them to avoid scurvy.
This Mrs. Bennett also did not pack any wrapping paper/gift bags (as at home we usually reuse the ones from last year)assuming that we could purchase some here....not so. Clear tape was also not to be found.
Instead, the large boxes with our decorative lamps had lots of left over packing paper and we used this material, plus some handy dandy duct tape, to wrap presents into the early hours of the morning...yawn!
This morning we had a breakfast of pancakes (a macgyvered gluten-free recipe) and smoked salmon.  We had toppings that went beyond just boring old maple syrup: whipped cream, creme fraiche, raspberry jam, the local version of nutella, chocolate sauce, and our new neighbour's homemade grapefruit marmalade - too decadent!!
The turkey has been in the oven for several hours and the house is filling with the scent of roasting meat.  This year we stuffed the turkey with leftover rice couscous and a spice blend we found at the mega Carrefour. We picked lemons from our backyard tree and juiced them to enhance the flavour of the bird. 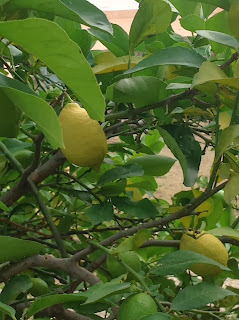 But the bird may not need much enhancement.  It was gift wrapped at the store and like most of the produce and meat here appears to be organic. 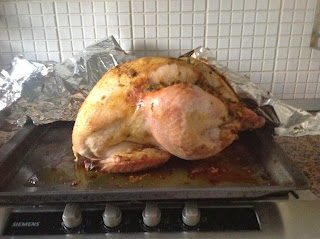 The food here has been a gift - so much fresh produce that we are often spoiled for choice.  To accompany this bird we will have fresh beets, broccoli (oh yes broccoli!), carrots, and mashed potatoes. Kaitlyn has made us a gluten free cheese cake for dessert.  Fabulous! The stores here have gluten free products!!!

Today has been spent playing Risk and building Lego.....and giving cats various treats (including sardines, which is their new favourite food). 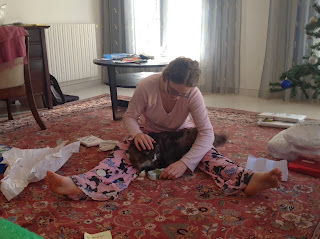 It is a cliché but I do feel so blessed to share this experience with my family and know that we are happy with the traditions we have made no matter where in the world we are!

Happy holiday to those celebrating Christmas and love to everyone back home in Canada! 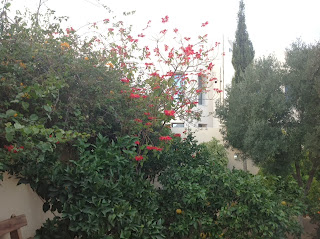